KRAMATORSK, Ukraine — Russian troops pushed deeper into a key eastern Ukrainian city, fighting street by street with Kyiv’s forces Monday in a battle that the mayor said has left Sievierodonetsk in ruins and driven tens of thousands of people from their homes.

Military analysts described the fight for Sievierodonetsk as part of a race against time for the Kremlin. The city is important to Russian efforts to quickly complete the capture of the eastern industrial region of the Donbas before more Western arms arrive to bolster Ukraine’s defense.

Weapons from the West earlier helped Kyiv’s forces thwart a Russian advance on the capital in the early weeks of the war. That failure forced Moscow to withdraw, regroup and pursue the more limited objective of seizing the Donbas, where Moscow-backed separatists already held swaths of territory and have been fighting Ukrainian troops for eight years.

“The Kremlin has reckoned that it can’t afford to waste time and should use the last chance to extend the separatist-controlled territory because the arrival of Western weapons in Ukraine could make it impossible,” Ukrainian military analyst Oleh Zhdanov said.

In a potential setback for Ukraine, however, U.S. President Joe Biden appeared to dismiss reports that the U.S. was considering sending long-range rocket systems to the country.

In addition to pleading for weapons from allies, Ukrainian President Volodymyr Zelenskyy has also repeatedly urged that European countries and others punish Russia for its aggression with sanctions and embargoes on Moscow’s lucrative energy sector. In a video address Monday to European Union leaders, Zelenskyy asked the 27 nations of the bloc to target Russian oil exports, so Moscow “feels the price for what it is doing against Ukraine.”

European Union leaders reached a compromise Monday to impose a partial oil embargo on Russia. The watered-down embargo covers only Russian oil brought in by sea, allowing a temporary exemption for imports delivered by pipeline.

EU Council President Charles Michel said on Twitter that the agreement covers more than two-thirds of oil imports from Russia, “cutting a huge source of financing for its war machine. Maximum pressure on Russia to end the war.”

Russia has also sought to use its energy exports to its advantage, cutting off natural gas to a handful of European countries in an effort to punish and divide the West over its support for Ukraine. In its latest move, Russian state gas giant Gazrpom said it will halt gas supplies to Dutch gas trader GasTerra starting Tuesday.

In his nightly video address, Zelenskyy said the situation in the Donbas remains “extremely difficult” as Russia has put its army’s “maximum combat power” there.

The Ukrainian military said Russian forces reinforced their positions on the northeastern and southeastern outskirts of Sievierodonetsk, a city 145 kilometers (90 miles) south of the Russian border in an area that is the last pocket of Ukrainian government control in Luhansk.

Sievierodonetsk Mayor Oleksandr Striuk said the city has been “completely ruined.” Artillery barrages have destroyed critical infrastructure and damaged 90% of the buildings, and power and communications have been largely cut to a city that was once home to 100,000 people, he said.

“The number of victims is rising every hour, but we are unable to count the dead and the wounded amid the street fighting,” Striuk told The Associated Press in a phone interview, adding that Moscow’s troops advanced a few more blocks toward the city center.

He said that only about 12,000 to 13,000 residents remain, sheltering in basements and bunkers to escape the Russian bombardment. The situation recalls the siege of Mariupol, which trapped residents and led to some of the worst suffering of the war.

Striuk estimated that 1,500 civilians have died in Sievierodonetsk since the war began, from Russian attacks as well as from dire conditions that include a lack of medicine and medical treatment. More than 20,000 are feared dead in Mariupol.

A 32-year-old French journalist, Frédéric Leclerc-Imhoff, died Monday near Sievierodonetsk when he was hit by shrapnel from shelling while covering Ukrainians evacuating the area, according to his employer, French broadcaster BFM TV.

Zelenskyy said Leclerc-Imhoff was the 32nd media worker to die in Ukraine since Russia invaded on Feb. 24.

While focusing on Sievierodonetsk, Luhansk Gov. Serhiy Haidai said the Russians were also pushing toward nearby Lysychansk. In addition to the journalist, two civilians were killed in the latest Russian shelling, he said.

Three civilians were also killed Monday in the Donetsk region, which together with Luhansk makes up the Donbas, the governor said. Authorities in Kharkiv reported one dead in the latest shelling of Ukraine’s second-largest city.

The Russian advance in Sievierodonetsk and Lysychansk on either side of the strategically important Siverskiy Donetsk River is part of an all-out push, said Zhdanov, the Ukrainian military analyst.

Zelenskyy said Russian troops also shelled Kharkiv on Monday, as well as the Sumy region near the Russian border. He said the struggle also continued for the southern Kherson region, which has been largely controlled by Russian troops since the early days of the war. Russia-installed officials there said they would ask the Kremlin to annex it, while Kyiv, in turn, has vowed to liberate the region.

Zelenskyy said Monday that “step by step, we are liberating our land and gradually approaching the point where Russia will still have to lay down its arms, count all its dead and move on to diplomacy.”

RELATED:  Wholesale inflation fell 0.5% in July, in another sign that price increases are slowing

The intensity of the latest fighting and the influx of Russian troops have surprised Ukrainians, who are trying to hold out until more weapons can arrive, Zhdanov said.

On Monday, Biden told reporters that there are no plans for the United States to send long-range rocket systems to Ukraine, amid reports that the move is being considered.

Dmitry Medvedev, the deputy head of Russia’s Security Council, called it a “reasonable” decision. He said that “otherwise, if our cities come under attack, the Russian armed forces would fulfill their threat and strike the centers where such criminal decisions are made.”

Medvedev added that “some of them aren’t in Kyiv.”

In the Kherson region, the Russia-installed deputy head of the regional administration, Kirill Stremousov, told Russia’s Tass state news agency that grain from last year’s harvest is being delivered to Russian buyers, adding that “obviously there is a lot of grain here.”

Russia, meanwhile, has pressed the West to lift sanctions against it as it seeks to shift the blame for the growing food crisis, which has led to skyrocketing prices in Africa.

Zelenskyy said the Russian blockade of Ukrainian sea ports is preventing Kyiv from exporting 22 million tons of grain intended for foreign markets. He accused Moscow of “deliberately creating this problem” and said Russia’s claims that sanctions are to blame is a lie. He said sanctions haven’t blocked Russian food, and he accused Russia of stealing at least a half million tons of Ukrainian grain.

Karmanau reported from Lviv. AP journalists around the world contributed to this report.

Follow AP’s coverage of the Ukraine war at https://apnews.com/hub/russia-ukraine 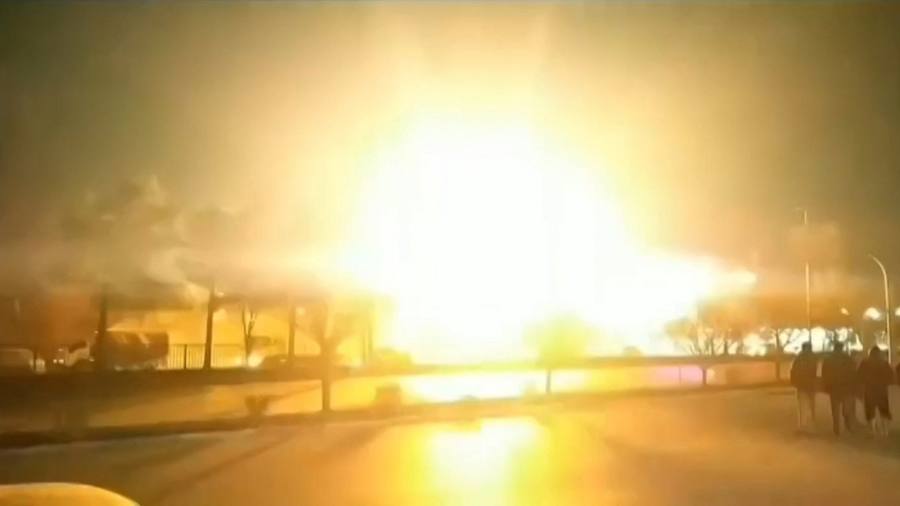