The Latest on Germany’s general election on Sunday:

The candidate from outgoing Chancellor Angela Merkel’s Union bloc says the party will do “everything we can” to form a new government despite posting what’s expected to be its worst election result in Germany’s post-World War II era.

Armin Laschet said on Sunday that “we can’t be satisfied with the result” of the exit polls. He said that “the result puts Germany, the Union, all democratic parties before big challenges.”

Laschet said Germany will likely have its first national government composed of three parties. He said that “we will do everything we can to form a government under the Union’s leadership, because Germany now needs a coalition for the future that modernizes our country.”

Laschet was surrounded by his party’s top brass, including Merkel, as he spoke at its headquarters in Berlin.

BERLIN – The two parties that exit polls put in third and fourth place in Germany’s general election now appear to play the role of kingmaker in determining the composition of the next ruling coalition and the country’s next chancellor.

The polls indicated the environmentalist Greens won about 15 percent, their strongest showing ever, but below expectations that had been fueled by a surge in popularity early in the campaign.

The Greens’ secretary general, Michael Kellner, said: “We gained significantly, but I find it difficult to really enjoy it because expectations were clearly higher.”

Kellner noted that the Greens have said they prefer a coalition with the center-left Social Democrats but added that “we are ready to speak with all democratic parties to see what’s possible.”

Exit polls show the pro-business Free Democrats to be in fourth with 11%-12%. During the campaign, they had said they preferred a coalition with the center-right Union bloc which suffered a sharp decline in support. Free Democrats’ Secretary General Volker Wissing, said on Sunday that it was too soon to discuss possible coalition partners.

BERLIN – The German capital looks set to get its first Green mayor.

Projections based on exit polls and partial vote counts show the environmentalist party winning the biggest share of the vote, ahead of the center-left Social Democrats who have held the mayoral post in Berlin for two decades.

In a second regional election held in parallel to the national vote Sunday, the Social Democrats were set for a strong win in the northeastern state of Mecklenburg Western-Pomerania. The party was projected to get 37% of the vote, ahead of the far-right Alternative for Germany with 18.5%. Exit polls showed the Social Democrats’ current coalition partners, the Union bloc, coming third in the state with 14%.

RELATED:  Tool created to aid cleanup from Microsoft hack in broad use

BERLIN – The general secretary of the center-left Social Democrats says he believes his party has been given a mandate to form a ruling coalition, based on exit polls in Germany’s general election.

Lars Klingbeil was speaking moments after the exit polls were published by the two main television channels on Sunday.

In a poll by the ZDF channel, the SPD was slightly ahead of its main rival, the center-right Union bloc, 26% to 24%. In the poll published by the ARD channel, the parties pulled even at 25%.

The polls suggested significant gains for the Social Democrats, compared to its standing earlier this year, and a sharp drop for the Union bloc. Klingbeil says the party now “has the mission to form a coalition,” and for its top candidate, Olaf Scholz to become chancellor.

BERLIN – The general secretary of German Chancellor Angela Merkel’s Union bloc says that early exit polls “hurt” as the party looked at its worst result since 1949.

With different exit polls putting the Union bloc neck-and-neck or slightly below the center-left Social Democrats, Paul Ziemiak said on Sunday that his party nevertheless wants to “serve this country” and will consider a coalition with the environmentalist Greens and the pro-business Free Democrats.

Exit polls by public broadcasters ARD and ZDF show the Union bloc down 8-9% compared to 2017, after four elections in which the party won under Merkel. Her successor, Armin Laschet, had low personal approval ratings and some in the party had questioned whether he was the right candidate for chancellorship.

Ziemiak said that his party was looking at “bitter losses” that would need to be analyzed.

A cheering Renée Röske from Cologne said she had been telling everyone that Scholz was the “best candidate” and that it’s now reflected in the exit polls.

The 42 year-old Röske said she noticed over the summer that once people realized that Merkel isn’t running again, they became more interested in politics and started to inform themselves about the three main candidates.

She said people noticed that Scholz “did the right things” during the pandemic and “that’s why the SPD in now leading, because Scholz is good.”

BERLIN – Germany’s election authority is making clear that center-right chancellor candidate Armin Laschet’s votes will be valid although they could be seen Sunday as he put his ballot paper into the ballot box.

German election rules state that ballot papers should be folded in such a way that it’s not possible to see how the person voted. It wasn’t immediately clear whether election officials in Laschet’s constituency in Aachen had noticed that his paper was folded wrongly, a moment that was caught by cameras.

Without explicitly naming Laschet, the election authority tweeted that “a nationally known politician voted for his own party, as expected.” It said that couldn’t be seen as an attempt to influence voters.

BERLIN — The environmentalist Greens’ candidate to be the next German chancellor says she’s hoping for “a few more votes” than pre-election polls showed her party getting.

Annalena Baerbock is the party’s first candidate for chancellor. It led in polls after she was nominated in the spring but recent surveys have shown it in third place, several points behind the center-left Social Democrats and outgoing Chancellor Angela Merkel’s Union bloc.

Baerbock said as she voted Sunday in Potsdam, just outside Berlin, that “we are of course hoping for a few more votes, with a view to the poll results, so that we can achieve a real new departure in this country.”

Even if the Greens aren’t in a position to provide Germany’s next leader, the party could be crucial to putting together a new coalition after the election. Polls point to a much better showing than the 8.9% of the vote it won in 2017.

BERLIN — Center-right candidate Armin Laschet’s votes were visible as he put his ballot paper into the ballot box — something that is supposed to be a no-no under German election law.

Election rules state that ballot papers should be folded in such a way that it’s not possible to see how the person voted.

It wasn’t immediately clear whether election officials in Laschet’s constituency in Aachen had noticed that his paper was folded wrongly on Sunday, a moment that was caught by cameras, or whether the faux pas would have any consequences.

Laschet is the candidate of outgoing Chancellor Angela Merkel’s Union bloc to succeed Germany’s longtime leader. Polls show his party neck-and-neck with the center-left Social Democrats after a bumpy campaign.

Under Germany’s complex electoral system, every voter gets two votes — one for a directly elected lawmaker and the other for a party list.

Recent polls point to a very close race between Laschet’s center-right Union bloc and the center-left Social Democrats, with the Greens trailing in third.

Laschet said as he voted Sunday in Aachen, on Germany’s western border, that the election “will decide on Germany’s direction in the coming years, and so it will come down to every vote.”

His Social Democrat rival, Olaf Scholz, said after he voted in Potsdam, just outside Berlin, that he hopes voters “will make possible … a very strong result for the Social Democrats, and that citizens will give me the mandate to become the next chancellor of Germany.”

Green candidate Annalena Baerbock is expected to vote in Potsdam later Sunday. Merkel’s spokesman has said that the outgoing leader was casting a postal ballot — as many Germans are expected to in this election.

BERLIN — Voters are delivering a mixed verdict on the era of outgoing Chancellor Angela Merkel as they choose a new German parliament, and some are struggling with the choice of potential new leaders.

Polls opened Sunday after a rollercoaster campaign. Recent surveys point to a very close race between Merkel’s center-right Union bloc and the center-left Social Democrats, with the Greens trailing in third.

In Berlin’s Kreuzberg district, a traditional leftwing stronghold, Jan Kemper, a 41-year-old manager at an online bank, said the climate crisis and Germany’s slow pace of digitalization were among his main concerns.

“This election is extremely important,” he said. “Previously, elections set the course for the next two to four years. Now decisions have to be made that will affect the next generations.”

In Berlin’s Mitte district, 48-year-old social worker Wiebke Bergmann said that “this election is really special, I think, because Angela Merkel is not running again.”

She said: “I really thought hard about which candidate I want as next chancellor — until this morning I hadn’t made up my mind. None of the three really convinced me.”

BERLIN — German voters are choosing a new parliament in an election that will determine who succeeds Chancellor Angela Merkel after her 16 years at the helm of Europe’s biggest economy.

Polls point to a very close race Sunday. The battle is between Merkel’s center-right Union bloc with state governor Armin Laschet running for chancellor and the center-left Social Democrats for whom outgoing finance minister and Vice Chancellor Olaf Scholz is seeking the top job.

Recent surveys show the Social Democrats marginally ahead. They also show the environmentalist Greens who are putting forth candidate Annalena Baerbock are in third place several points behind. About 60.4 million people in the nation of 83 million are eligible to elect the new parliament. 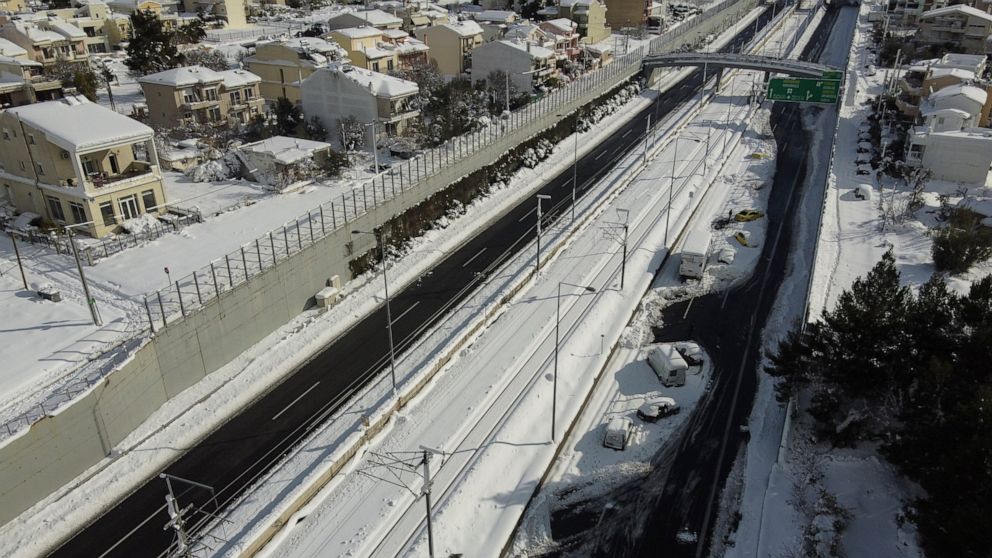 Activist investors and a ‘greenwashing’ backlash: Change is coming to the corporate world