“You look at Mike, and there’s not a line wasted… He is such an astonishing artist.” An early promo teaser trailer has debuted for an indie documentary project called Mike Mignola: Drawing Monsters, from filmmakers Jim Demonakos & Kevin Konrad Hanna. The doc profile focuses on comic book artist & creator Mike Mignola, best known for creating Hellboy and the B.P.R.D. They’ve just launched a new Kickstarter campaign, hence the teaser, with plans to finish up later this year. Mike Mignola: Drawing Monsters “tells the definitive story of one of the most influential and important comic book creators of all time,” including “never-before-seen interviews conducted with the legendary creator at his studio, drawing demonstrations, behind-the-scenes footage from comic book conventions,” and more. This looks like it can break out of the by-geeks-for-geeks mold of docs like this and give more people a chance to learn about Mignola and his art. 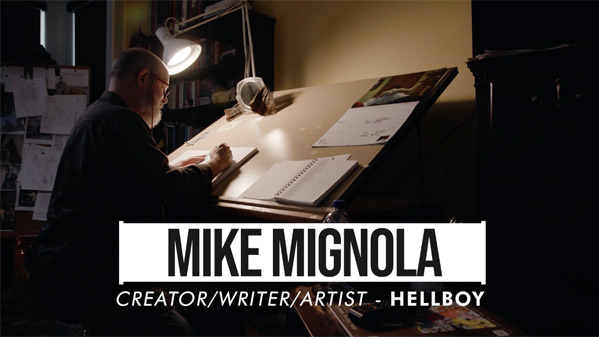 As one of the most successful independent comic book creators, Mike Mignola has inspired generations of writers and artists. Mike Mignola: Drawing Monsters provides an in-depth look at his legacy, from the beginning of his career working as an inker for Marvel Comics to his international success with Hellboy. The documentary film features never-before-told revelations from Neil Gaiman about the Mignolaverse and the production of Guillermo Del Toro’s Hellboy II, and an interview with “Steven Universe” creator Rebecca Sugar discussing Mignola’s influence on her creation. Mike Mignola: Drawing Monsters is co-directed by filmmakers Jim Demonakos and Kevin Konrad Hanna (The Clockwork Girl), both making their first feature documentary. The film is currently being completed, with a funding campaign running on Kickstarter. It’s expected to be ready to debut in spring 2022 early next year. Who’s looking forward to this?

The Boy in the Striped Pajamas