“Robots must protect dog.” Apple has finally unveiled an official trailer for the sci-fi movie known as Finch, formerly titled BIOS before Apple picked it up. After numerous delays since last year, it’s now opening in November this fall on Apple TV+. This project was once known as Goodyear (the dog’s name in the movie) and was also titled BIOS before Apple picked up the film from Universal, skipping theaters for a streaming debut. It’s produced by Amblin, Walden Media, and ImageMovers, which is quite a combination of powerful moviemakers. Tom Hanks is Finch, a man who embarks on a moving and powerful journey to find a new home for his unlikely family—his beloved dog and a newly created robot—in a dangerous and ravaged world. “An epic adventure like no other.” Also featuring Caleb Landry Jones as the voice of his robot named Jeff. And an adorable doggo. This is an out-there concept: set in a post-apocalyptic future, a man creates a robot to help protect… his dog? I mean, I totally love this concept, but I understand why it might’ve been hard for Universal to market this to audiences disinterested in original ideas. I’m all about it! Can’t wait to watch it.

RELATED:  Lil Nas X Warns Fans Ahead Of Time That His New Song Is “NOT FOR YOUR KIDS!” - The Shade Room 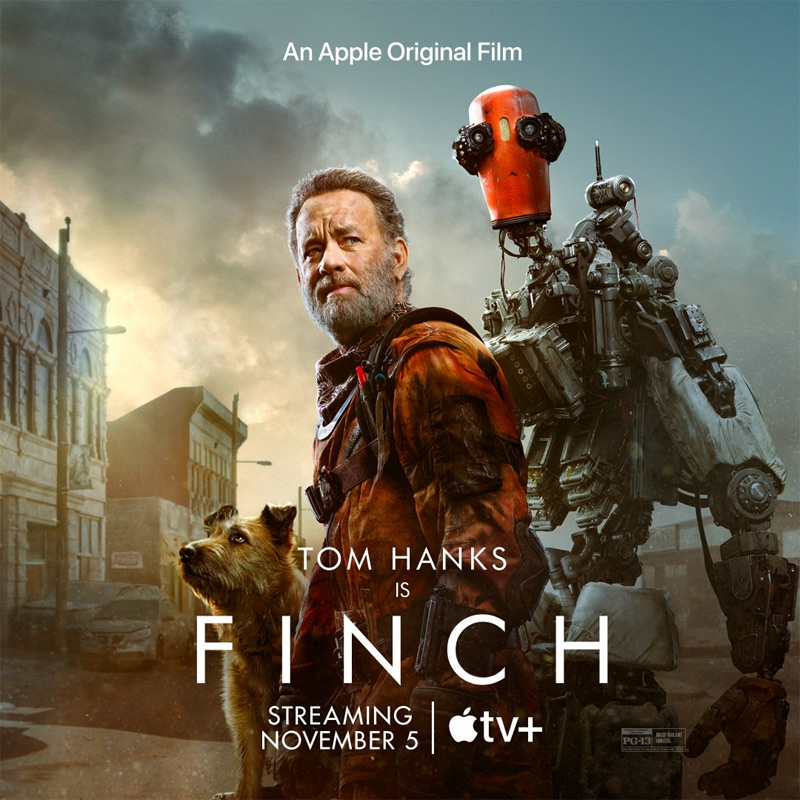 In Finch, a man, a robot and a dog form an unlikely family in a powerful and moving adventure of one man’s quest to ensure that his beloved canine companion will be cared for after he’s gone. Tom Hanks stars as Finch, a robotics engineer and one of the few survivors of a cataclysmic solar event that has left the world a wasteland. But Finch, who has been living in an underground bunker for a decade, has built a world of his own that he shares with his dog, Goodyear. He creates a robot, voiced by Caleb Landry Jones, to watch over Goodyear when he no longer can. As the trio embarks on a perilous journey into a desolate American West, Finch strives to show his creation, who names himself Jeff, the joy and wonder of what it means to be alive. Their road trip is paved with both challenges and humor, as it’s as difficult for Finch to goad Jeff and Goodyear to get along as it is for him to manage the dangers of the new world. Finch, formerly known as BIOS, is directed by British filmmaker Miguel Sapochnik, director of the film Repo Men previously, as well as TV work including “Game of Thrones” and “Banshee”. The screenplay is by Craig Luck and Ivor Powell. Produced by Amblin Entertainment, Reliance Entertainment, Imagemovers, Walden Media, and Misher Films. Apple will release Finch streaming on Apple TV+ starting November 5th, 2021.

RELATED:  Why I'm So Glad I Threw Out My "Never Date a Guy With Kids" Rule