Watch: ‘The Battle of San Romano’ Painting Animated as a Short Film

Experience this epic battle like never before! Swiss animation filmmaker Georges Schwizgebel originally premiered this animation project back in 2017, but it’s finally online to watch thanks to Vimeo. The Battle of San Romano is a short film taking a classic painting, the famous 15th century triptych “The Battle of San Romano” by Italian Renaissance painter Paolo Uccello, and animating it using a unique paint-on-glass technique. It’s all done by hand. “The movement begins at the top left-hand corner of the painting and ends in the same piece, which allows me to restart the spiral. At the beginning, I’m looking for how square 1 will turn into square 2, into a total of 36 different segments.” Schwizgebel has made 20 other films before this with the same technique, and has picked up many awards over the years. It reminds me of these stunning hand-painted films Loving Vincent & The Peasants. It also gives this painting a whole new life. View below. 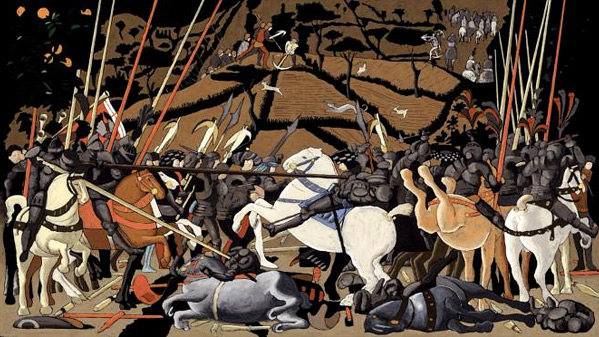 Thanks to Vimeo Staff Picks for the tip on this. Intro from Vimeo: “A movement within a painting, which begins with the savagery of a battle and comes to a halt in a rendition of a masterpiece of the 15th Century; The Battle of San Romano by Paolo Uccello.” The Battle of San Romano short film is directed and animated by acclaimed Swiss filmmaker Georges Schwizgebel – you can see more of his work on his Vimeo or learn more about him via Wikipedia. He also made the paint-on-glass-animated 2004 film L’Homme sans ombre, which won awards. This one is produced by Schwizgebel, with a score composed by Judith Gruber-Stitzer. It initially premiered in 2017, and played at numerous festivals including Cannes, Annecy, Animafest Zagreb. He explains: “I don’t use any software. I animate with pencil and paper and then paint with acrylic paint on cells. It took about 6 months to make…” For more info, read Vimeo’s interview. For more shorts, click here.

RELATED:  Sir Tom Jones Wows With Impromptu Performance Of ‘With These Hands’