A Peel police officer has been suspended and an internal investigation has been launched after a Global News reporter recorded him hugging unmasked people who were protesting against the closure of a Mississauga gym.

“Upon learning of the incident, I immediately directed that the sergeant be suspended and commenced an Internal Affairs investigation,” he wrote in a statement.

“Peel Regional Police are committed to ensuring the safety of our members and the public. Our officers will enforce municipal and provincial regulations as required.”

According to reporting by Global News, one of its reporters was at Huf Gym near Cawthra Road and Dundas Street East on Friday to report on continuing protests against the Ford government’s COVID-19 restrictions, which have temporarily shuttered gyms.

There, the reporter, identified as Sean O’Shea, recorded himself as an unmasked protester aggressively approached him wearing a sweater with the words, “hugs over masks.”

O’Shea, still recording, approached a Peel police officer at the scene and asked if he condoned that behaviour. The officer in the video can be heard telling the journalist that he was agitating the crowd.

The same officer, not wearing a mask or any COVID-19 protective gear, can later be seen hugging some of the protesters and posing for pictures. None of the demonstrators can be seen physically distancing or wearing any protective equipment.

Under current COVID-19 restrictions, all gatherings and protests must follow provincial laws. Tickets may be issued to individuals or organizers who do not comply with this order, the statement reads.

Will there ever be robot umpires in MLB? - Sportsnet.ca 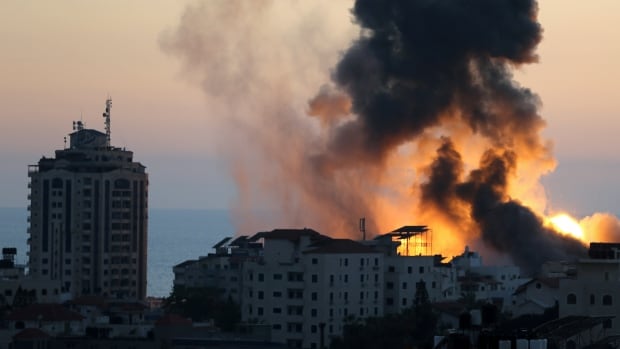 ‘A heavy cloud over us’: Canadians with loved ones in Gaza, Israel watch with heartbreak as violence unfolds | CBC News

Peculiar pets: How one man learned that six peacocks are better than one
52 mins ago