The latest coronavirus news from Canada and around the world Saturday. This file will be updated throughout the day. Web links to longer stories if available.

Ontario also administered 154,104 vaccine doses Friday, a record and the first time the province has been over the 150,000 mark.

8:49 a.m.: COVID has been Canada’s longest, darkest winter. Residents bubbled, huddled and waited, believing May would bring reliable sunshine and they could once again become patio animals. They would take back their six feet, just enough room for four chairs and a table with an umbrella, tip big, and help their favourite local bar get back on its feet — a patio stimulus package.

On a patio, they could eat, drink, talk and laugh their way into an economic recovery, one pint, one burger at a time — the beginning of the end of the pandemic, a beginning that has again been delayed.

“I think patios are a central part of any metropolis. They bring the city to life,” says Sharat Ramamani, 26, a tech manager who lives in Cabbagetown and who, in a normal summer, spends one to two nights a week al fresco with friends.

“I think that’s a reason why you have so many folks out there at least asking for patios to be open again,” says Ramamani.

Whether or not patios should be open now is a topic of some debate among experts.

Read the full story from the Star’s Francine Kopun.

8:47 a.m.: The Centers for Disease Control and Prevention said Thursday that fully vaccinated people — those who are two weeks past their last required dose of a COVID-19 vaccine — can

But on Capitol Hill, lawmakers have to keep wearing masks on the House floor, according to a memo from the Office of the Attending Physician, Dr. Brian Monahan.

“The present mask requirement and other guidelines remain unchanged until all Members and Floor staff are fully vaccinated,” House Speaker Nancy Pelosi said in a memo to her Democratic colleagues. “Returning the Capitol to the welcoming and safe venue that it has been requires us to not only secure it physically but to make it safe from the virus.”

Recent surveys suggest that about 1 in 4 House lawmakers are not fully vaccinated.

Lawmakers can remove their masks while on the House floor to make speeches, but must mask up after they finish. They are, however, free to resume “pre-pandemic activities” elsewhere in the House complex of office buildings and public spaces.

8:45 a.m.: Georgia’s 26 public universities and colleges do not currently plan to require students, faculty or staff to be vaccinated against COVID-19 in the fall, according to guidance issued by the University System of Georgia.

The universities are supposed to make sure vaccinations are available, but schools won’t be “responsible for assessing current COVID-19 vaccination rates for their institution.”

The university system said it had made the decisions in concert with the state Department of Public Health and that they were subject to change.

The Board of Regents insisted on at least some in-person instruction in the fall and spring semesters. Those moves came despite resistance from some employees.

8:45 a.m.: Walmart, the world’s largest retailer, says it won’t require vaccinated shoppers or workers to wear a mask in its U.S. stores, unless state or local laws say otherwise.

Vaccinated shoppers can go maskless immediately, the company said. Vaccinated workers can stop wearing them on May 18. As an incentive, Walmart said it is offering workers $75 if they prove they’ve been vaccinated.

8:44 a.m.: India’s two biggest cities have reported a drop in daily infections but the government is warning that the devastating surge is spreading in rural areas, where nearly two-thirds of India’s 1.4 billion people live.

Prime Minister Narendra Modi on Friday warned people to take extra precautions as the virus was spreading fast in rural areas. He said the government was mobilizing all resources, including the military.

News reports say villagers have been rushing the sick to nearby towns and cities for treatment because health care facilities are limited in the countryside.

After a peak of 11,000 daily infections, Mumbai, India’s financial and entertainment capital, has been reporting less than 2,000.

8:44 a.m.: As coronavirus infections decline in parts of the world and the summer holiday season tentatively begins, the Dutch government has eased travel restrictions for a group of popular vacation destinations.

Among the countries with a lower risk of infections that can be visited starting Saturday are Portugal, Malta, Ireland, Thailand, Rwanda, the former Dutch colonies of Aruba, Curacao and Sint Maarten and a large group of Greek islands.

They previously were designated code orange, meaning the government advised only travelling there if it was urgently necessary. The Greek mainland and Crete remain under code orange.

The destinations are now yellow code, meaning Dutch travellers can visit without having to undergo a COVID-19 test and go into self-isolation on their return.

However, the foreign ministry is stressing that travellers still have to adhere to local rules and restrictions in the countries they visit, which can include showing a negative coronavirus test and self-isolating on arrival.

Cases of a strain first identified in India have more than doubled in a week. Government scientific advisers say the variant is likely more transmissible than the U.K.’s dominant strain, though it’s unclear by how much.

Prime Minister Boris Johnson has warned that the variant “could be a serious disruption to our progress.” He says the next stage of lockdown-easing measures will take place as planned on Monday but warned the variant might delay plans to lift all restrictions on June 21.

Labour Party lawmaker Yvette Cooper said the government had not barred visitors arriving from India until April 23, a decision that let in “many hundreds of new variant cases.”

More than two-thirds of British adults have received a first dose of a coronavirus vaccine and 37% have had both doses. The government is shortening the gap between doses for people over 50 from 12 to eight weeks in a bid to give them more protection.

8:41 a.m.: Ontario golfers have been pushing the province to reopen courses ordered closed while the province is under stay-at-home orders, but some observers say access to outdoor recreational facilities serving a wider population should be just as high on the agenda.

Doctors and recreational facility administrators say Canadians need access to affordable, inclusive and local ways to get outside and exercise, so long as health care professionals deem it safe.

“Many of the people I care for live in dense apartment buildings, have small indoor spaces and don’t have the luxury of a backyard,” said Dr. Naheed Dosani, a palliative care physician and health justice activist in Toronto.

“We need to really be thinking about how to keep these people physically and mentally healthy.”

Dr. Dosani and others hope the province will make any reopening of recreational opportunities equitable. As well as golf courses, basketball nets, skate parks and tennis courts have remained out of bounds for months.

Golfers and club operators argue the sport is safe since it’s possible to golf while masked and physically distanced, other provinces are currently allowing the sport and people aren’t travelling to play.

“They are looking to play their local golf course in their home community for the physical and mental health break that the sport provides,” Mike Kelly, the executive director of the Golf Association of Ontario, said in May.

Several doctors have even given golf and many other outdoor forms of exercise the green light because the risk of transmitting COVID-19 is low outside.

Educator draws her knowledge on her grandmother’s teachings One confirmed dead after early morning house explosion in Saskatoon 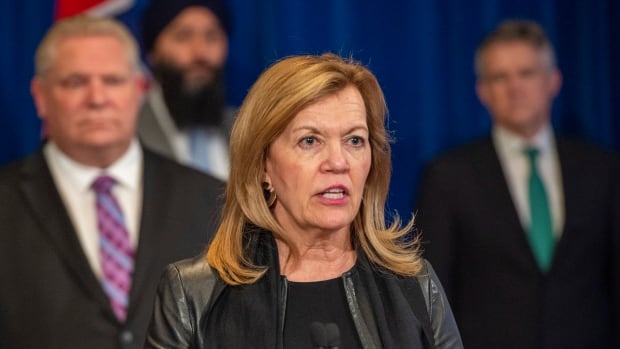