5:15 a.m. German Chancellor Angela Merkel and the country’s 16 state governors are expected Wednesday to extend a partial shutdown well into December, and discuss tightening some restrictions while allowing somewhat more generous rules for the Christmas period.

Proposals drawn up ahead of Wednesday’s video conference by state governors, who are responsible for imposing and lifting restrictions, call for extending the shutdown until Dec. 20.

5:10 a.m. Russian authorities have registered a record number of coronavirus deaths for a second straight day.

The government coronavirus task force reported 507 new deaths on Wednesday, the country’s highest daily toll. The previous record of 491 deaths was reported on Tuesday. A total of 37,538 people have died from the coronavirus in Russia, according to the task force.

Russia has been swept by a rapid resurgence of the outbreak this fall, with numbers of confirmed infections and deaths hitting new highs almost daily and significantly exceeding those reported in the spring.

The country’s authorities have rejected the idea of another nationwide lockdown or widespread closure of businesses, even as media reports from Russian regions showed that the health care system was under severe strain.

5:07 a.m. A top European Union official said Wednesday that the first citizens in the 27 nation bloc could be vaccinated against the coronavirus by Christmas, but she warned that member countries must urgently prepare their logistical chains for the rollout of hundreds of millions of doses of the vaccines.

Claiming that “there’s finally light at the end of the tunnel,” European Commission President Ursula von der Leyen told EU lawmakers that “the first European citizens might already be vaccinated before the end of December.”

The commission, the EU’s executive arm, has agreements with six potential vaccine suppliers and is working on a seventh contract. The deals allow it to purchase over 800 million doses, more than the population of the bloc, which stands at around 460 million people.

On Tuesday, Brussels said it would sign a contract for up to 160 million doses of the experimental coronavirus vaccine developed by Moderna, which the company says appears to be 94.5% effective, according to its preliminary data.

But von der Leyen said that while vaccines are important, “what counts are vaccinations. ”

RELATED:  Blair 'has no time' for partisan outrage over immunizing inmates

5:04 a.m. Ontario’s auditor general is set to release a report today on how the province has handled the COVID-19 pandemic so far, including how it has made decisions during the global health crisis.

The special report issued by Auditor General Bonnie Lysyk will look at emergency management in the context of the pandemic, as well as outbreak planning and decision-making.

It will also include an audit of government processes related to COVID-19 testing, case management and contact tracing.

The report is set to be made public this morning.

Wednesday 4 a.m. The Ontario government is expected to spell out its guidelines today for celebrating the upcoming winter holidays as the COVID-19 pandemic continues.

Toronto and Peel Region are currently under the grey or lockdown level in the province’s tiered COVID-19 alert system, with those restrictions to stay in place at least until the week of Christmas.

Public health measures under the lockdown level include a ban on indoor gatherings except with those in the same household, as well as closing down restaurants for all but takeout and delivery.

The province’s top doctor said earlier this week it seemed unlikely the situation would improve in those regions enough over 28 days to warrant moving them to the red alert level, which is one level lower.

Ontario’s most recent modelling showed the province is on track to see up to 6,500 new daily cases of COVID-19 by mid-December, though those projections are expected to be updated Thursday.

Tuesday 10:47 p.m.: A forgiving grading system is the solution students at the University of Manitoba want to address the challenges of learning on a virtual campus this year.

Student senators, backed by the undergraduate and graduate students unions at the U of M, have penned a proposal to school administration to temporarily introduce an alternative grading process, similar to the one put in place in the spring amidst initial COVID-19 disruptions.

The group wants pupils to have the option to either choose a pass-or-fail or accept a letter grade that is excluded from their grade point average calculation for a maximum of one course per term in 2020-21.

Students would still be able to accept all their grades, as usual.

The intent is to “add a little bit of flexibility in this inflexible time,” said Rubel Talukder of the Student Senate Caucus. 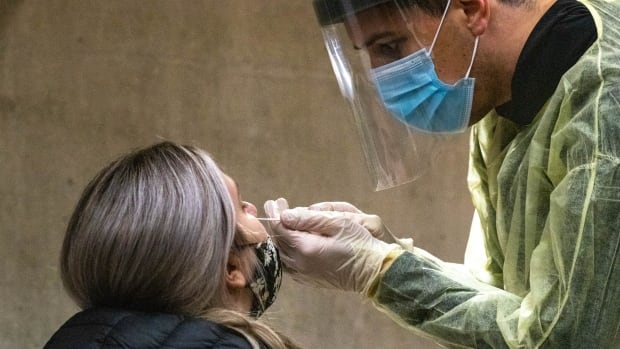