Nottinghamshire made impressive work of chasing down what might have been a tricky fourth-innings target to complete a 10-wicket victory over Derbyshire in the County Championship.

Haseeb Hameed made 93 and Ben Slater 64, the openers sharing an unbroken partnership of 167 to see their team home within a single session – albeit one extended by almost 20 minutes to avoid the players having to return after lunch.

The Trent Bridge side take 23 points but their fourth win in six matches so far was not enough to dislodge Middlesex from the top of the Division Two table.

Derbyshire suffered their first defeat under the stewardship of new head coach Mickey Arthur, although given their depleted bowling ranks they always faced a tough task against a strong Nottinghamshire line-up.

Two of the bowlers due to start this match, Suranga Lakmal and Anuj Dal, dropped out injured at the 11th hour, Dal as late as Thursday morning, after the original team sheet had been submitted. Another, Luis Reece, suffered a groin injury after bowling less than nine overs in the first innings.

Lakmal, the veteran Sri Lankan who signed a two-year contract with the county during the winter after calling time on an illustrious international career, has an elbow injury that is giving cause for concern ahead of the Vitality Blast season, which in Derbyshire’s case begins with a home fixture against Birmingham Bears next Friday.

Hameed set a positive tone by dispatching the first ball of the day through midwicket for four off Sam Conners and the scoring rate never dropped below four runs per over.

The former Lancashire opener, who made his first century of the season against Middlesex at Lord’s last week, had one sizeable stroke of luck on 70 when he swung hard at a ball from Nick Potts that went straight through the hands of Alex Thomson at slip.

The first 10 of his 12 fours had come from largely orthodox shots but having gone past fifty he was keen to get the job done as quickly as possible, clearing the ropes in consecutive overs off Thomson’s off spin, the first time with a soaring blow over deep midwicket, the second over the much shorter boundary at extra cover.

It was enough to reduce the runs required to a point where umpires David Millns and Neil Mallender were able to delay signalling lunch until the match was over, with only 24 needed when the players would normally have left the field.

Slater, who offered a difficult chance to short leg off Thomson on 31, was almost sedate by comparison, needing 108 balls to pass fifty for the second time this season.

The only frustration for Nottinghamshire was that Hameed could not get on strike to complete a century when Leus Du Plooy bowled what would be the final over, Slater striking two boundaries to see them over the line.

Derbyshire’s fears that their first-innings 260 would prove to be a below-par total, even against an attack boasting three past and present Test bowlers after being asked to bat first, were seen to be well founded when Nottinghamshire posted 358 in reply.

With 19-year-old fast bowler Potts again showing himself to be a promising newcomer, claiming a career-best 4-50 in his third first-class match, they were at least able to take the match into a fourth day.

Nottinghamshire, three without loss overnight, might have expected the odd wobble chasing 165 to win but in the end were able to stroll home in the face of what can only be described as a disappointing effort by the visitors. 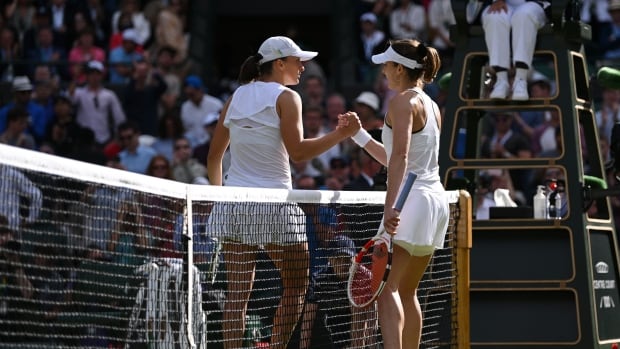 World No. 1 Swiatek’s 37-match winning streak ends with loss to Cornet in 3rd round at Wimbledon | CBC Sports