After making her Opals’ debut 25 years ago as a 16-year-old, Lauren Jackson gave fans around the world a final reminder of her greatness in a four-and-a-half-minute stretch that will go down in Australian sporting folklore.

Heading into the bronze medal game against Canada at the FIBA Women’s World Cup in Sydney, almost everyone in the stadium and at home knew it was going to be Jackson’s final game in the green and gold, but no-one could have expected what was to come.

Having already accomplished everything there was to achieve in basketball and retired — due to debilitating knee injuries — as unquestionably Australia’s greatest player in history back in 2016, Jackson decided 11 months ago that she was ready to get back to playing the game she loved.

All the hard work that followed that decision came to the fore when the Opals needed her most.

Having put the Opals on her back and led them to victory on countless occasions throughout her Hall-of-Fame career, Jackson wound back the clock halfway through the third quarter on Saturday to take over the game with four glorious jump shots in a row that blew the contest to pieces.

Canada simply could not find an answer for Jackson, a scenario that just about every nation has experienced at some point over the last 25 years.

Whether Canada tried to double her on the block, trap her outside the paint or just try to deny her the ball, nothing worked as Jackson scored 13 points in the third quarter.

There was a sense of disbelief as the crowd watched on. Everyone in the stadium wanted Jackson to put on one last show, but this was more than a show.

Sami Whitcomb — who was absolutely ruthless all tournament long — spoke about the team knowing they would be able to rely on Jackson.

“You can’t script it any better,” Whitcomb told ABC Sport after the game.

“It’s a long tournament, it’s hard for all of us, but we just wanted to help get her through to this moment as best we could because we knew potentially there would be a moment like this where we would lean on her.

“She did it and to do it like this, genuinely you can’t script it any better.”

As the game went on and Australia built an unassailable lead, it turned into party time for the Opals as every player got on the court.

After an incredible tournament, Steph Talbot was once again the steady hand that led from the front, finishing with a monster stat-line of 16 points, eight rebounds, eight assists and two steals.

Talbot’s tournament was a testament to her toughness, versatility and flat-out desire to win games of basketball for her country.

Whatever the Opals needed — be it a huge rebound, drive to the bucket, stifling defence or a timely triple — Talbot delivered all tournament long. She was duly rewarded with a place in the tournament’s All-Star Five.

Opals coach Sandy Brondello read the room to perfection in the fourth quarter by inserting Jackson back into the game with six minutes to play.

In an encounter where Jackson equalled the record for the most World Cup games played with 43 — to sit alongside Brazil’s Janeth Dos Santos Arcain — she continued to break records as she also became the all-time leader in points scored (81) in medal games in FIBA Women’s World Cup history.

It was the perfect send-off for one of the Australia’s best international performers.

After being robbed of a fitting retirement in 2016 due to injuries, Jackson’s second coming provided the ultimate story book ending to the career of the greatest Opal of all time.

Australia roared home with a 44-22 second-half display on its way to collecting an unforgettable bronze medal with a dominant 30-point win, 95-65.

The result capped off a brilliant tournament for the Australians on home soil and was made all the more impressive considering a mere 15 hours earlier the Opals had their hearts broken in a two-point loss to China in the semifinal.

To be able to recover — both physically and mentally — to the point where they were just far too good for Canada showed exactly what this Opals team was about.

The relentless pursuit to get back on the podium – after a disastrous Tokyo Olympic campaign – was made possible by the commitment from each player to play the right way and compete on every single possession.

Whitcomb spoke about accomplishing the goal of getting on the podium at a home World Cup.

“It’s so special – we’ve talked about this for like a year now and then it was 200 days, 100 days out and we’ve just been planning and working towards this for a really long time,” she said.

“The off-court stuff, the on-court stuff – all of it. So it’s just really special and I’m really proud.”

Whitcomb credited that bond between the playing group as being the key to their success.

“I think it matters and it matters when it’s authentic as well,” she said.

The bond was crucial, as was the defensive effort and trust.

“I think so much of why I love [the defensive side of the game] so much for us and why it is so special, is because that’s just heart and effort,” Whitcomb said.

“We do have some incredible defensive players. Talbot is a machine and I don’t think I’m that great of a defender but knowing how we all fit together and trust that I can do this because you’ve got my back.

“I see Talbot giving everything which makes me want to give everything. Defence is why we’re here, 100 per cent.” 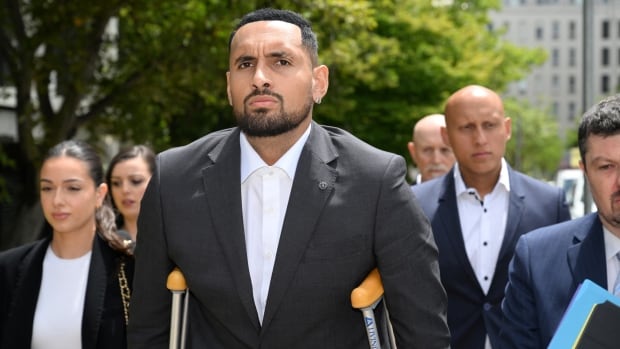 Kyrgios pleads guilty to assault, has no conviction recorded